How to Make Pempek Submarine Anti-Fail

Seeing the appearance of the submarine pempek, you may be confused about how to get a nice shape with egg yolk filling that looks perfect when cut. Making pempek submarine with egg yolk stuffing does require a trick when making the dough so that the results are good. 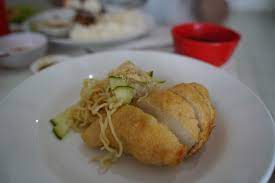 Pempek itself is made from tapioca flour mixed with ground fish meat. In fact, pempek uses belida fish. However, because now belida fish are rarely found, Palembang people usually use other types of fish. For example mackerel, snapper, cork, and fish nuts.

Outside of Palembang, pempek is usually enjoyed with gravy at the same time. Whereas in the area of ​​origin, pempek is usually dipped in cuko or pempek sauce. From my experience eating snacks in Palembang, the sauce is thicker, fresher, and more spicy. Different from the taste in the capital city of Jakarta.

The basic dough of flour and fish is also widely applied to several other Palembang snacks. Examples such as tekwan, celimpungan, or models. They all come with a different composition of flour and fish.

If you want long-lasting pempek, prepare raw materials in large quantities and cook until the boiling process. Leave it until the pempek is not hot, then store it in a container and coat the pempek with tapioca flour.

The goal is for pempek not to stick to each other easily. Store in the freezer until just before use. Serve submarine pempek as a companion at home or as a long-term food supply.

1 Pempek dough: Mix well the mackerel fish and half the water. Add flour, mix well, add tapioca flour and the rest of the water while continuing to stir.​

The chef's hands form the underwater pempek dough into a round

3. Reduce the heat when it boils, set aside. Divide the dough into 4 parts, round. Roll in tapioca flour until evenly covered so that the dough is easier to shape.​

The beaten eggs are poured into the submarine pempek dough

4. Take one piece, then shape it into a bowl, put the egg in it, cover it slowly, trim the ends to form like an underwater pempek.​

5. Slowly add the pempek into the boiling water. Cook until pempek floats. Lift. Roll in tapioca flour. Repeat the same process for the remaining pempek.​

6. Heat the oil, cook the pempek until the skin is crispy and golden brown. Lift, drain

8. Serve pempek with cuko and its accompaniments.

Interesting isn't it how to make a pempek submarine? Filling time at home becomes even more fun by creating something challenging enough but with great taste in return!